Our virtual concerts use original songs about the seven "steps to democracy" to get kids excited about civics.  Students sing, move and clap as they learn timely lessons about voting, community service, inclusion and understanding the news. Our  high-energy assembly show, "Vote for Me!" tells the story of a student council race, and audience members decide the winner in a mock election. Some songs have verses and refrains in Spanish. Ideal for Grades K-5, especially Grades 3, 4 and 5. Run time: 45 minutes.

Civic Circle workshops can be tailored to meet your needs. Students can explore one, two, or several of the "steps to democracy" at the heart of our program, over one or more sessions. One of our signature offerings is a collaborative songwriting workshop, usually spread over three, one-our class sessions, in which students write and perform their own original democracy song. Workshops may take place after school, or during classroom time. 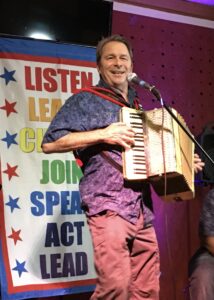 Nick Newlin has been entertaining children of all ages for 30 years as NicoloWhimsey with his high-energy super-fun comedy juggling act, including storytelling, poetry and audience participation. He also directs plays at the high school level and has written a book series called “The 30-Minute Shakespeare.” Nick also plays rock and roll accordion! 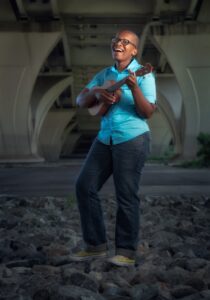 LEA is an award-winning songwriter well known to Washington area audiences. She has worked extensively with students and adults in a variety of settings, from sing-alongs to songwriting workshops. You can learn more about LEA here.