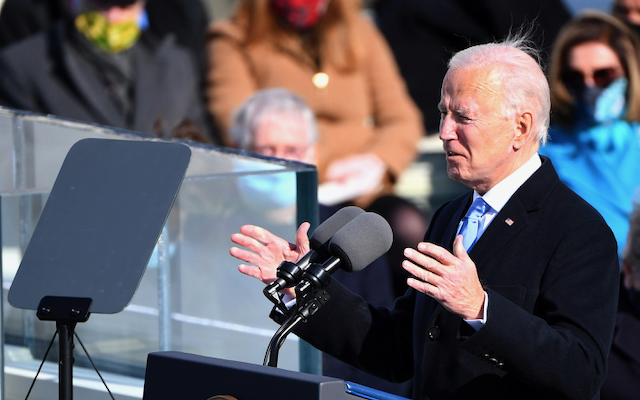 One of Donald Trump’s very last acts as president was to release a report by his “1776 Commission” that trumpeted “patriotic education,” defended the Founding Fathers’ ownership of slaves, likened progressives to Mussolini, and was roundly denounced by historians.

Four days later, one of President Joe Biden’s first acts as Commander in Chief was to toss out that report via executive order. Biden’s action came on the heels of an inaugural speech that invoked the peaceful transfer of power, civility, pluralism, tolerance and truth.

It was a fitting start to what could turn out to be a breakthrough year for civic learning. As I wrote in The Fulcrum, a bipartisan bill to invest $1 billion in civic education, a teacher-friendly president, popular support for civic learning, a surge in youth activism—and the fragile state of American democracy itself—have all combined to create what iCivics Executive Director Louise Dubé has called “sort-of a Sputnik moment” for civics.

Dubé’s group and its 144-member CivXNow Coalition are rallying broad support for the bill, authored in the Senate by Texas Republican John Cornyn and Delaware Democrat Chris Coons, a close Biden ally. In March, iCivics will also release a new civic education “roadmap” in collaboration with Arizona State, Harvard and Tufts universities. The “Educating for American Democracy” blueprint will articulate updated goals for civic learning that emphasize civic agency, equity, and inclusion.

To many, the civic education reset comes not a moment too soon. The recent insurrection at the Capitol “is more than a ‘wake-up’ call. It’s a fire alarm,” argues Alan D. Solomont, dean of the Tisch College of Civic Life at Tufts. “Our expectations for what students should learn have been set far too low,” wrote Solomont in a Fulcrum op-ed endorsing passage of the Coons-Cornyn Educating for Democracy Act.

At a time when both parties routinely invoke the Constitution in policy and political battles, public knowledge of our founding document is abysmally low, warns constitutional law expert Jeffrey Rosen, the president of the National Constitution Center. Web traffic at the center has been hitting all-time highs lately, but Rosen told CBS that there’s “no doubt that we are in a crisis of civic education.” He added that “without constitutional education, the Republic will collapse."

Teachers have struggled to help their students make sense of the recent Capitol insurrection. To some, the topic has been “too fraught with emotion and political controversy to deal with at any length,” reported The Washington Post. But as historian Nikolas Bowie has written, the Capitol assault was “a continuation of—not an aberration from­–America’s constitutional tradition.” Students “don’t need to like how the Constitution has been interpreted,” Bowie wrote in a Post op-ed. “But they do need to understand how it should be interpreted. The Constitution provides the vocabulary by which this country debates what is just.”

Public support for civic education approaches 60 percent on both sides of the aisle, pollster Frank Luntz found last year. The question of exactly what students should learn has been and remains polarizing. It’s just one of many obstacles that advocates of civic learning will face, including ongoing controversies over school openings, and over education policies and funding writ large. Nevertheless, civic educators start the year with fresh backing at the highest levels of government.

CIVIC LEARNING IN MARYLAND will soon get a statewide boost when the first-ever Maryland Civic Education and Engagement Leadership Summit takes place on February 17, from 3-7 p.m. The featured speaker will be former Education Secretary John B. King Jr., president and CEO of the Education Trust, a national nonprofit that works to close achievement gaps in education. He’ll be joined by educators, students, nonprofit and business leaders, and elected officials. Topics will include best practices in civic learning, and how to strengthen civics education in the state. To learn more about this virtual summit, which is being organized by the Maryland Civic Education Coalition in partnership with the University of Maryland’s College of Education and School of Public Policy, please click here. To register, please click here.