The Civic Circle was thrilled to perform "Vote for Me!" at St. Andrews in our debut school assembly, attended by an audience of about 60 enthusiastic Third, Fourth and Fifth-Graders.

The show was extremely well received, and Nick and Lea performed with great energy, chemistry and panache. Nick and Lea played instrumental versions of "This Land is Your Land" and "Down by the Riverside" on the accordion as the kids filed in, which set a nice tone for the show.

Everything went smoothly, including the instrumental-only backtrack, and Nick and Lea livened up the dialogue and songs with percussion and some additional instrument-playing.

We were all fascinated to see how the kids reacted to the songs and the action, particularly their identification with Nick as a rabble rouser. They also voiced actual disappointment when Nick struck a compromise with Lea at the end, a response that reflects the prevailing culture, but that the script may need to anticipate.

The kids also gave us some ideas for ways we can make the show even more interactive, spontaneously echoing the refrain on "Join Us," and singing along on the reprise of "Citizen Tango." All in all, we came away feeling that we had a show that was perfectly suited to this age group, and that connected with them musically and dramatically. We are looking forward to the next performance! 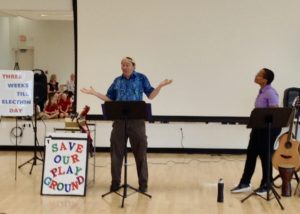