The Civic Circle had a banner week, with great turnout at our Celebrate Democracy Concert on November 3, and our approval as a 501(c)(3) charity from the IRS just two days later.

The concert was a true community event in every respect. Our two performers—renowned vocalist LEA, and popular entertainer Nick Newlin, better known to his younger generation fans as NicoloWhimsey—went beyond the call of duty in learning a whole new script and eight new songs to introduce everybody to our assembly show, “Vote for Me!”

Cook Ross, Inc., which occupies an important civic space in our community by creating diverse leadership cultures, was a fitting sponsor for this event. We were thrilled to partner with Carpe Diem Arts so that the wonderful youth of “Ukes on the Move” could help lead us on “This Land is Your Land” in English and Spanish.

We had generous food donations from El Golfo Restaurant and Kaldi’s Social House, two neighborhood eateries that have also distinguished themselves for their commitment to community building. Lots of people donated their time and talent to help create and perform the show, from Civic Circle board member Ritchie Porter, who directed and helped write “Vote for Me!” to Steve Stecker of Asparagus Media, who co-wrote the song “This is Democracy,” and who played bass and guitar with Nick and LEA. My very own cousin, Lucy Bell Jarka-Sellers, author of “Meet John Dough, Superhero,” a book replete with civic lessons in its own right, was nice enough to invite us to sing some of the original “America the Beautiful”  verses that she has been collecting and curating.

Lots of friends, neighbors and relations pitched in with food contributions, and helped with setup and cleanup, demonstrating true civic spirit! And this was a multi-generational event, with Ritchie’s niece, Liz Porter, doing videography, and our young friend and neighbor, Makenna Beam, acting as House manager. We received outstanding feedback from the audience, including puppeteer Michael Cotter and singer-songwriter Audrey Engdahl, which we are already implementing to make this show more polished and interactive.

And we couldn’t have done any of it without our wonderful board. A special tip of the hat this time goes to Michael Amilcar, our vice president, and to Tony Nam, our program committee chair, who were driving forces behind this event. Thanks, everbody! — Eliza Newlin Carney 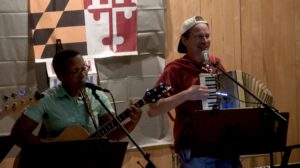 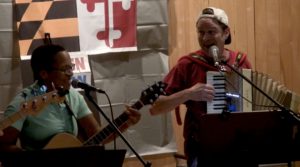 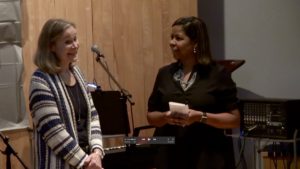 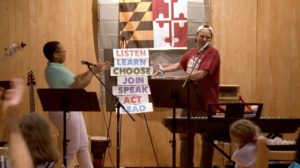 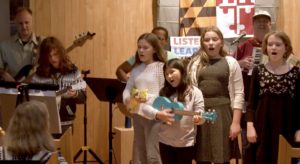 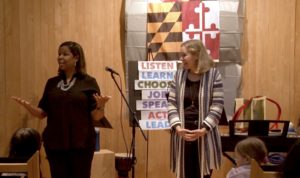 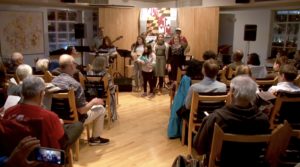